Tucked behind the green door of Number 18 Stafford Terrace – also known as Sambourne House – in Kensington is a house museum which time forgot, a five-storey cabinet of curiosities. You may have seen it before in Merchant Ivory’s ‘A Room with a View’ or in ‘Maurice.’ It’s the former family home of ‘Punch’ cartoonist, Edward Linley Sambourne, his wife Marion and their two children. It’s a veritable shrine to Victorian interior design, providing a rare insight into the domestic and family life of the epoch. And it’s not just the interiors which will surprise you: wind your way up to the second floor for a peep at London’s rudest bathroom. 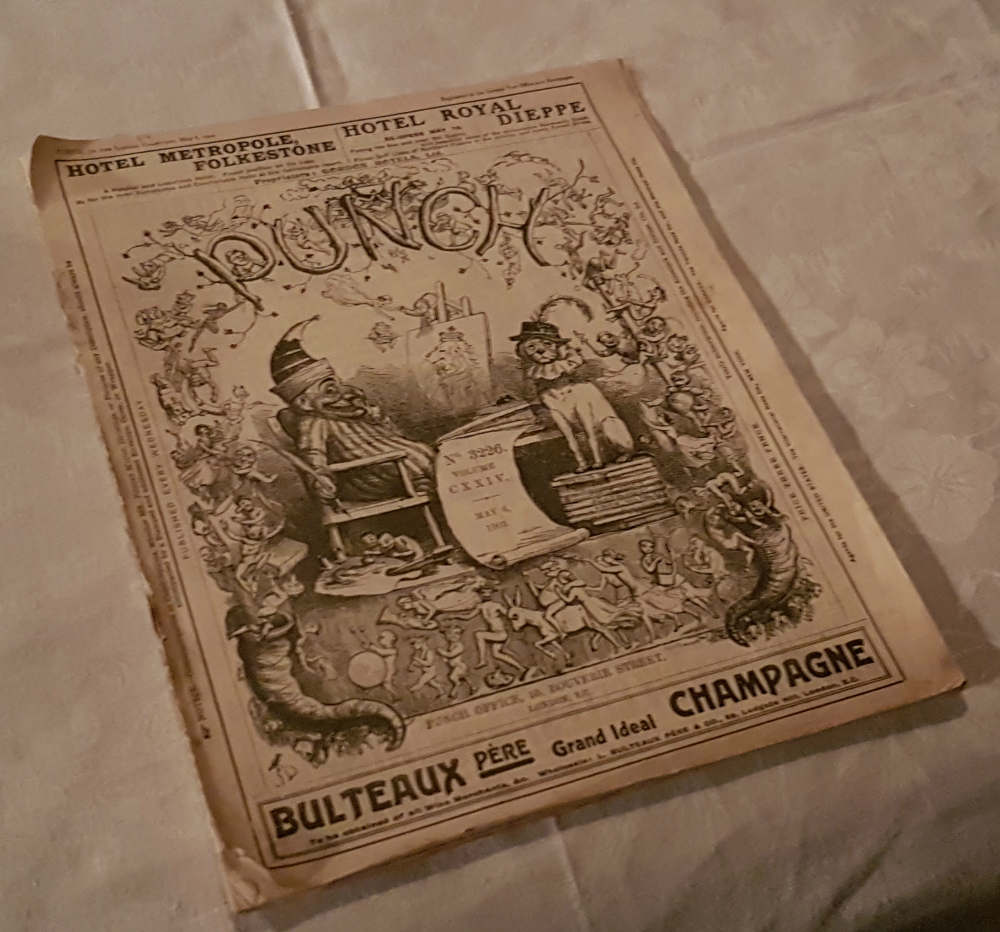 The name may ring a bell. Edward Linley Sambourne is great-grandfather to Lord Snowdon (photographer and husband to Princess Margaret), and great-great grandfather to David Armstrong-Jones, aka David Linley.  Sambourne was a cartoonist and illustrator, working for the satirical magazine ‘Punch’ for over forty years. During his lifetime, he produced about 3,000 cartoons for ‘Punch’ as well as numerous book illustrations and advertisements.

In the mid-1880s, Sambourne took up photography which developed into a passion. His photographs would become the templates for his illustrations. He used his children as models and posed for his own selfies. In 1887, he began to photograph professional models in the nude. The collection at 18 Stafford Terrace includes 15,000 of his photographs, cyanotypes and glass plate negatives.

Sambourne and his new wife Marion moved into Stafford Terrace in 1875, and lived in the house with their children Maud and Roy for the rest of their lives. They entertained the who’s who of Victorian society and were good friends with neighbours Lord Frederic Leighton and George Frederick Watts. 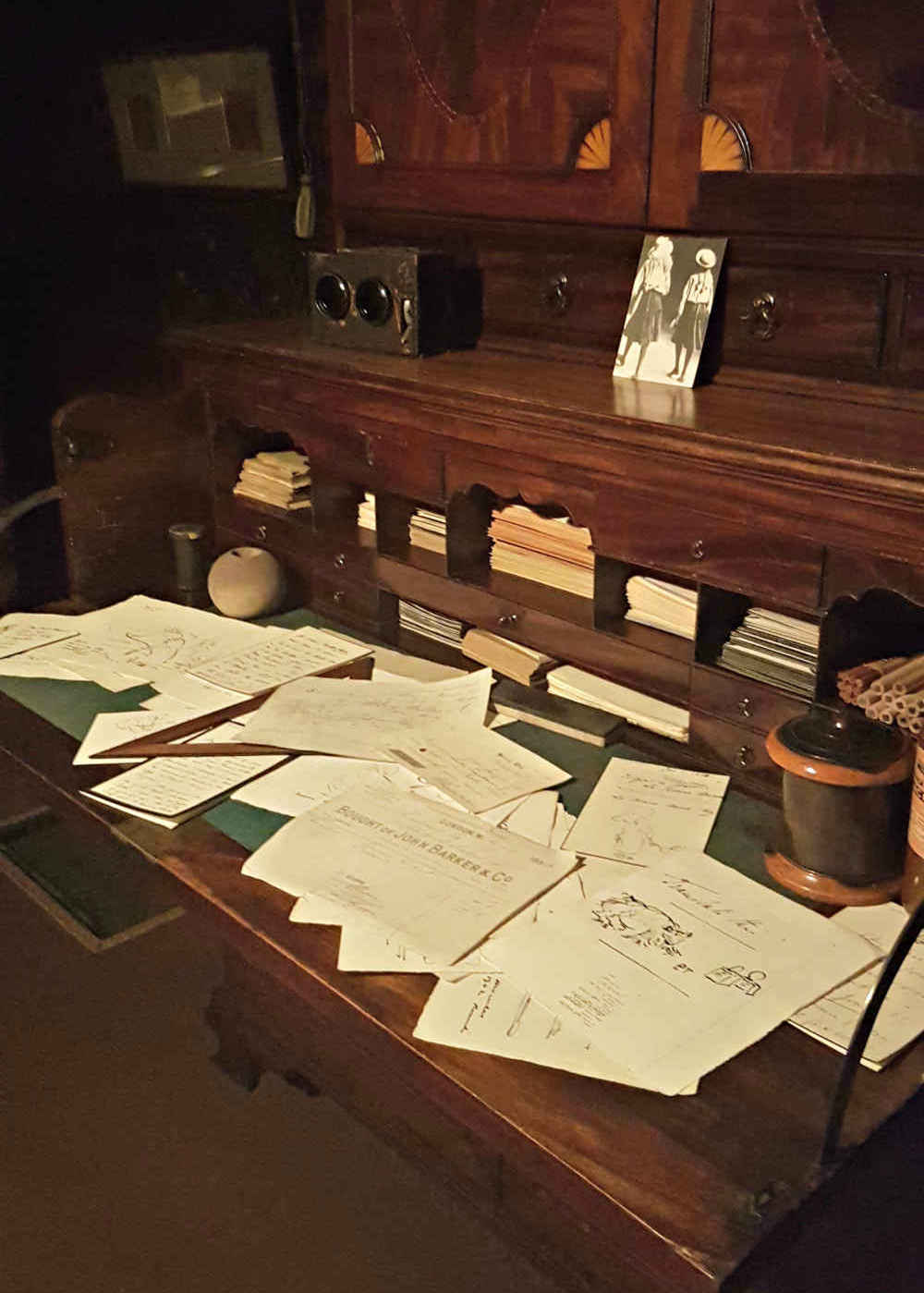 Maud’s daughter, Countess of Rosse, campaigned for the preservation of Victorian art and architecture. She ensured that the house and its contents would remain virtually intact. In 1980, she sold the house to the Greater London Council, and in 1989 ownership passed to the Royal Borough of Kensington.

A Tour of 18 Stafford Terrace

I took a costumed evening tour of 18 Stafford Terrace with Mrs Reffell, the housekeeper. She peppered the evening with gossipy tales about the other members of the household and how Mr and Mrs Sambourne loved to entertain. An excitable Marion Sambourne joined the tour, showing us around her artistically-decorated Drawing Room.

©The Royal Borough of Kensington and Chelsea. Image Kevin Moran

The entrance hall retains original Minton tiles, and there are several examples of Sambourne’s illustrations on the walls. On the first floor landing is a mini fern conservatory hanging off the house, created by removing the original sash window.

The house is stuffed beautiful, providinga rare insight into the Aesthetic style or House Beautiful, and Sambourne was very hands-on with the interior design. Oscar Wilde and his wife Constance were also fans of this interior design style. The House Beautiful was epitomised by dark colours with shades of green, maroon and gold. Ornaments would include blue and white china and Japanese ceramics, and Sambourne’s Victorian family house bears all the hallmarks of the decorative style.

©The Royal Borough of Kensington and Chelsea. Image Kevin Moran

The Drawing Room was decorated with a William Morris wallpaper but later upgraded with an embossed and gilded Japanese paper. As this was very expensive, the Sambournes only papered those areas which were visible, leaving the Morris paper intact behind pictures. 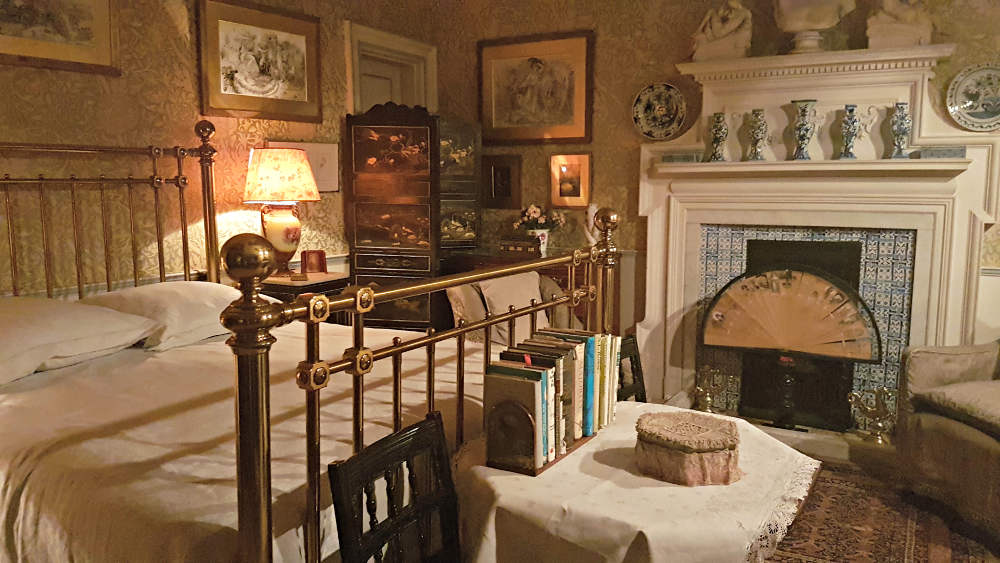 The principal bedroom was decorated by the Countess of Rosse in 1960. She retained some of her grandparents’ furniture including their brass bed. The fireplace is in the style of the architect Norman Shaw (largely responsible for the design of the Bedford Park homes in Chiswick). The fan was decorated and signed by well-known artists of the time including Watts and Alma-Tadema.

Mr Sambourne was a keen photographer. He converted the Night Nursery into a studio and developed his photographs in the bathroom tub next door.

Now, you probably want me to tell you about those rude photographs. Well, you’ll just have to go there and see for yourself won’t you! But you can take a little sneak peep here. 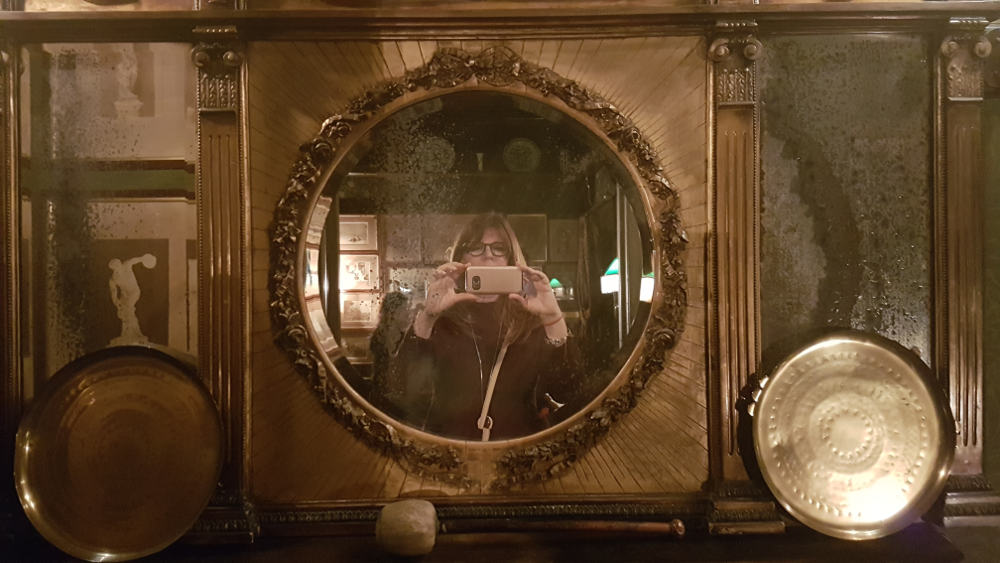 I do love a convex mirror!

Actor-led tours provide a dramatic account of life at the Sambourne family home, based on Marion’s diaries. The tour lasts approximately 1 hour and 15 minutes. From £8

The house museum is open daily on Wednesdays, Saturdays and Sundays. Admission from £5. You can book tickets here. 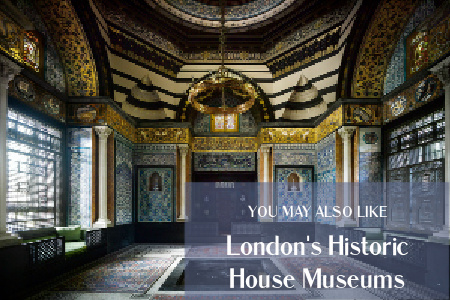 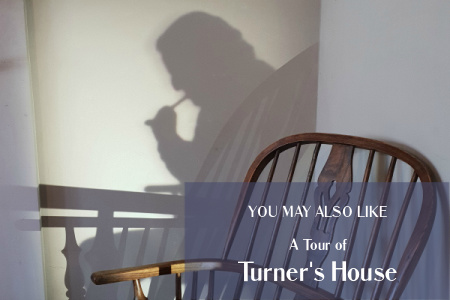 King of Bling: Charles II at the Queen's Gallery