Oh dear, it’s the summer holidays which means one thing: M and M, or Madness and Mayhem.  Your little ones are catapulted from the school classroom back into your living space for a full six weeks of delightful chaos.

This is my first July in London for fifteen years. I’m lucky enough to have an office in Portugal, so I would normally be ensconced in sunny Quinta do Lago by now (more on that in my next post). This year, I’ve decided to spend some of the summer in London, so here’s my guide to surviving in the big city with your whippersnappers. 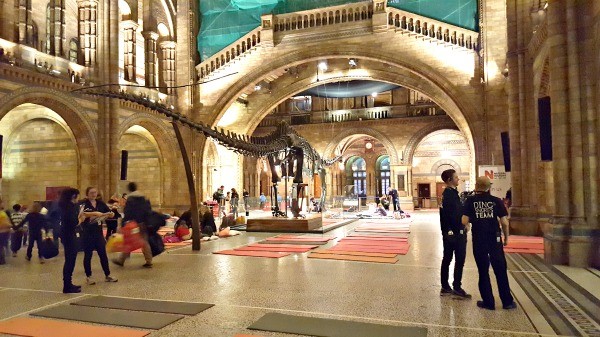 Sleeping with Paddington, Darwin and a Diplodocus at the Natural History Museum

This takes the prize for my absolute favourite party outing with my nine year-old, Anais. My friend Lucy D invited me along for this roaring sleepover at the Natural History Museum, although when I say invited, I am pretty sure there was a motive behind this behest: to keep her sane with an unruly group of nine year-old girls, and more importantly, help her smuggle some wine into the museum for some overnight gallivanting.

We set up our sleeping bags (with yoga mats provided by the museum) in the Hintze Hall under the giant Diplodocus, went down to the restaurant for tea and cake, and then tucked into a night of activities: a torch lit trail, a t-shirt making workshop and science show. At midnight it was lights out, and we all had a good night’s sleep despite some thunderous snoring coming from under the Diplodocus (was it human or dinosaur, we will never know).  At 7am, breakfast was followed by an hour of fun with Nick Spellman, the Animal Man.

The whole experience was really quite magical: it’s how I imagined a sleepover would be with Charles Darwin, Paddington Bear and some fossilised friends from Jurassic Park. There’s a host to look after you the whole time, and it’s all organised with military precision. If you’re in a large group, I recommend joining the queue early so you can bag a good corner for your sleepover. Bring your own snacks, some earplugs, an extra yoga mat at if you can, and if you’re smuggling in some tipple, do so at your own peril!

Note: Perpetual Peter Pans out there can also book an Adult Dino Snore. 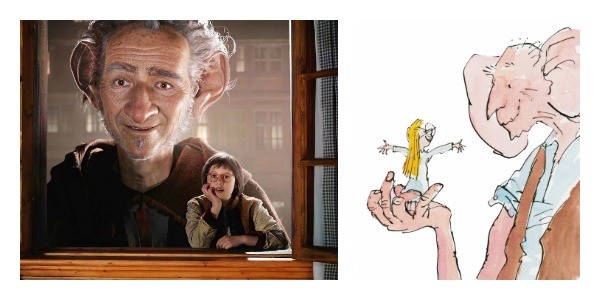 London’s gone all BFG this summer. You can catch the Spielberg film in cinemas from July 22nd. Starring my favourite actor, Mark Rylance, I’m whizzpopperingly happy. Or, you can head over to Harrods for story time sessions every hour from 12 to 5.30pm daily (sessions last 30 minutes in the Toy Kingdom Reading Room and are free for 2-10 year-olds).

To tie in with the launch of the film, fifty BFG Dream Jars have been placed in locations all around London (and in Birmingham, Cardiff, Glasgow and Manchester). The jars are based on dream stories from celebrities such as Steven Spielberg, Dominic West, Mark Rylance, Niall Horan, Stephen Hawking and the Duchess of Cornwall. Look out for BFG Dream Jars in iconic spots such as Tower Bridge, Trafalgar Square and Buckingham Palace. You can catch 32 Dream Jars now and a further 18 by 22 July. Dreams are on display until the 31st August, after which they are being sold at auction to raise money for Save the Children. 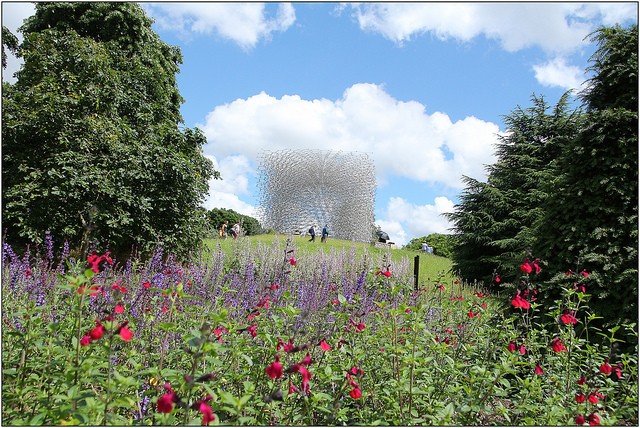 The Royal Botanic Gardens at Kew covers 300 acres and is 250 years old.  You could spend a whole day here with the kids getting lost in the Bee Garden, visiting the human-sized badger sett, playing in the Climbers and Creepers indoor play area or in the Treehouse Towers outdoor area.

The main buzz this summer though has to be The Hive, designed by artist Wolfgang Buttress and standing proud at 17 metres high. The kids can stand or lie down under the latticed, metallic structure with thousands of flickering lights, and listen to music which has been created to mimic the sound of a bee.  So pack a picnic (honey sandwiches a must) and make sure you grab a pew in London’s prettiest gardens this summer.

Entry to The Hive is included with day admission to Kew Gardens. 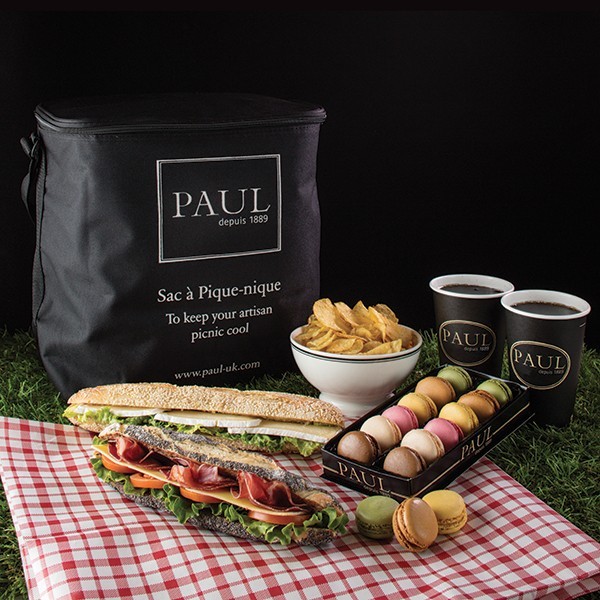 Order a picnic from Paul’s (cold sandwiches or salads, mini macarons, drinks, crisps, picnic bag and chequered tablecloth – £20 for two or £38 for 4.

Discover London before, during, and after the Great Fire of 1666 in an interactive exhibition marking the fire’s 350th year anniversary. The exhibition is supplemented with many additional activities such as walks, lectures, workshops and family activities. From £8 adults, £4 for children.

You could then wander over to Postman’s Park and visit the sweet and touching memorial garden, created during Queen Victoria’s Jubilee year, in order to commemorate heroic men and women who sacrificed their lives for others. Thousands of these heroic names are displayed in a Royal Daulton tiled gallery. Postman Park

If you have energetic ones, here’s a great way to get them tired out – these are tried and tested by Anais, and she loves them! 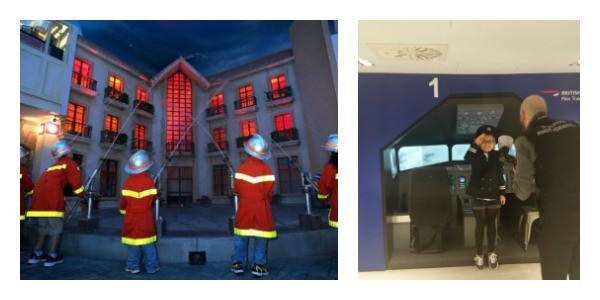 Anais had her birthday party at Kidzania West London, this year, and it was worth every penny. Adults sit in a viewing gallery inside the £20m indoor mini-city. Kids learn how to work in zones such as an estate agency, an aviation academy, a hairdresser, a bank, fashion factory, radio station, etc. in exchange for KidZos money which they can spend on other activities or treats. Forget the Olympic Games, and head over to Kidzania from Saturday 16th July – Sunday 4th September for a 4-hour sporting themed play of Kidzania Games. From  £23 children and £10 adults. Kidzania

There are thirty Go Ape locations across the UK, and a London branch in Battersea Park, but if you have wheels, head out to Go Ape in Bracknell. With 2,600 acres of woodland, it’s a perfect day out for the kids (and if you have a dog, the walks here are pooch-perfect). 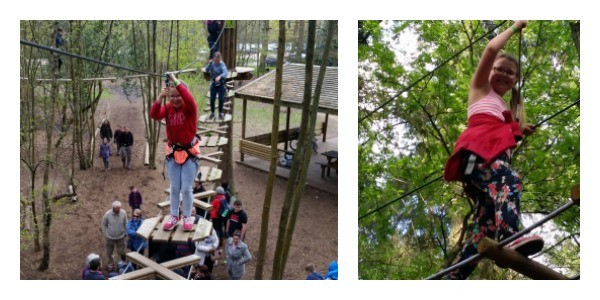 Kids can unleash their inner Tarzan with a choice of outdoor activities: Tree Top Adventures (for over 10s), Tree Top Junior, Forest Segway and Zip Trekking Adventure. You’ll get a safety briefing before you head off to start your course. From £18 for juniors and and £25 for over 10s.  Go Ape

I’m obsessed with The Globe. It’s my favourite venue in London, whether it’s watching the Bard at work from the oftentimes wet pit of the Globe Theatre, or making merry with the likes of Mark Rylance or Gemma Arterton in the candlelit Sam Wanamaker Playhouse. 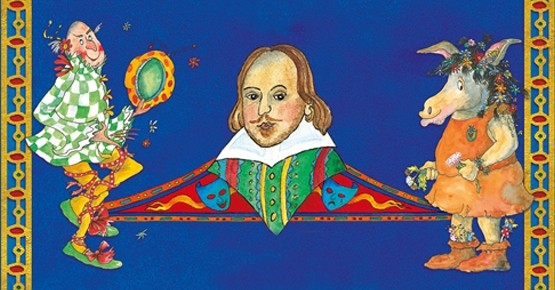 This summer, the Globe is playing host to a Family Literary Festival, with plenty of storytelling featuring the antics of The Tiger Who Came to Tea or Gorilla, or listening to classics such as Robin Hood or Macbeth. The festival also features the free ‘Bottom’s Book Market’, dedicated to stories with pop up performances, puppet shows, reading tee-pees and a multi-sensory space accessible for all story lovers. Michael Morpurgo,  author of War Horse and Running Wild, will be talking to the Globe’s new Artistic Director Emma Rice about his latest book, Such Stuff: A Story-maker’s Inspiration, where he reveals how writing works and where stories begin.

Explore the Golden Hinde, a reconstruction of Sir Francis Drake’s Tudor warship, which circumnavigated the world between 1577 and 1580. This fully-working ship was launched in 1973 and has since traversed the globe itself and sailed over 140,000 miles. Included in your visit to the Globe Exhibition is an Elizabethan Dressing demonstration using clothes from the Globe Theatre wardrobe. Adults £16, Children Free 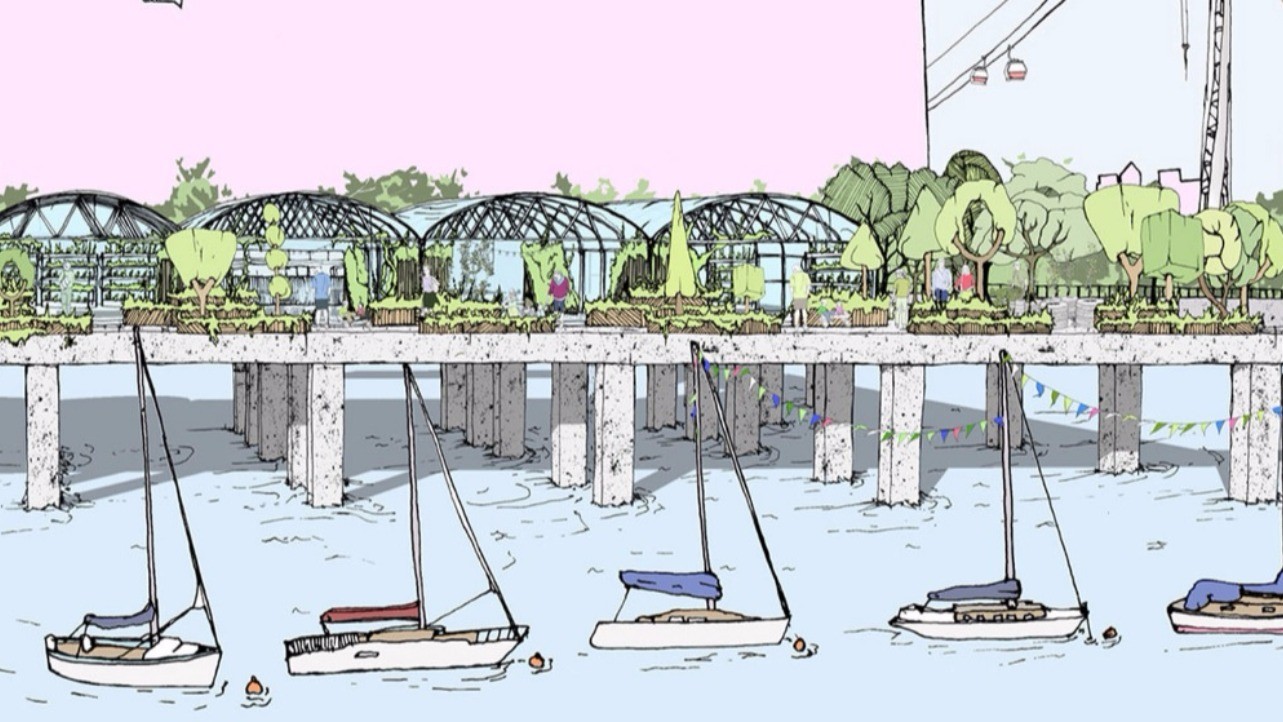 Farmopolis is the outing of choice for your green-fingered bambinos. It’s a giant floating garden in Greenwich opening on the 30th July, it’s completely free (although a donation of £3 is suggested), and there are plenty of activities for both adults and children. This green-stilted oasis suspended over the river is filled with tens of thousands of plants rescued from the Chelsea Flower show. The year-round space will feature a cinema, theatre, bar, café, supperclubs, literary salons and workshops. Catch a screening of Disney’s Zootropolis on the 31st July, a children’s theatre workshop on the 2nd August, make edible hats or do some pirate gardening on the 3rd, and lots more throughout the summer.

Don’t lose your marbles if you can’t make it to a real beach this summer: you can spend the day making sandcastles in the 2,200 square metres of urban beach in the Queen Elizabeth Olympic Park instead. There’s a 25m x 8m kids’ paddling pool, funfair rides, two beach bars and plenty of activities including beach volleyball. 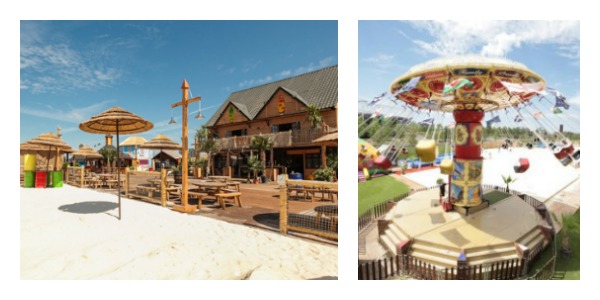 The beach is open daily between 10am – 10pm and is free. It’s located next to Westfield Stratford, so you could combine your beach outing with some shopping or a film.

If your kids fancy themselves the next Gordon, Jamie, Nigella or Delia, there are plenty of courses to get their fingers sticky this summer.

Jamie Oliver teaches kids a thing or two about cooking

I went on a Thai curry lesson with the man himself when the school, located at the back of Jamie’s Italian in Westfield, first opened. Jamie has a great team behind him, so eventhough you may not get a peep at the nation’s favourite cook, your kids will be well looked after by his cooking lieutenants in beautifully-designed kitchens. There’s a large course offering for kids: sushi, pasta, pizza, bread baking, curry and chocolate. Jamie Oliver Cookery School 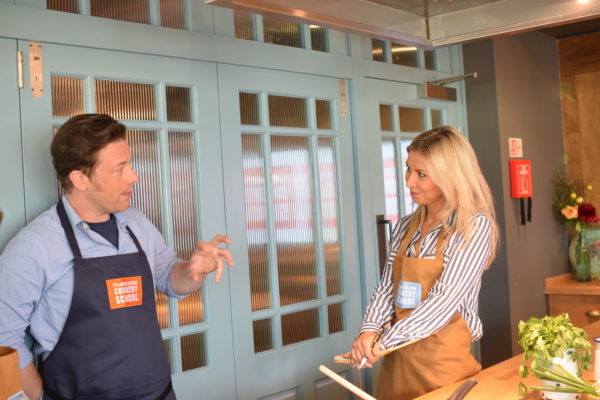 Jamie chats to my daughter Clarissa at his new cookery school located in Westfield.

Waitrose has two London schools: one in Finchley Road and the other in King’s Cross. Both have children’s workshops all summer, such as “A taste of Greece” where little chefs will learn to make flatbread and roasted pepper houmous, or a “Taste of USA” which features my favourite: the banoffee pie. Waitrose Cookery School 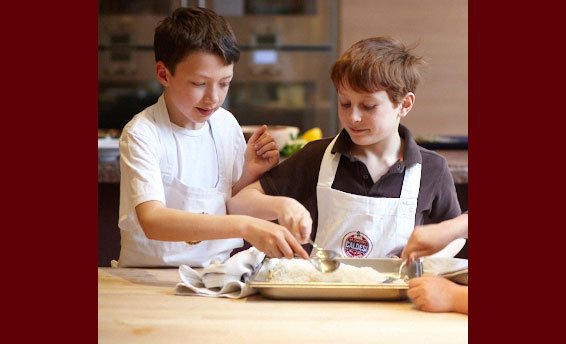 Caldesi is tucked away on Marylebone Lane behind the high street. The cookery school there is famous, and I have many friends who rave about it. Caldesi hosts an Italian Mama’s Summer kitchen course where your kids will learn how to make a 3 course menu, good enough for Mama and for Papa. Lunch is included with the course which lasts 2.5 hours and is aimed at 6-12 year-olds. £45. Caldesi Cookery School 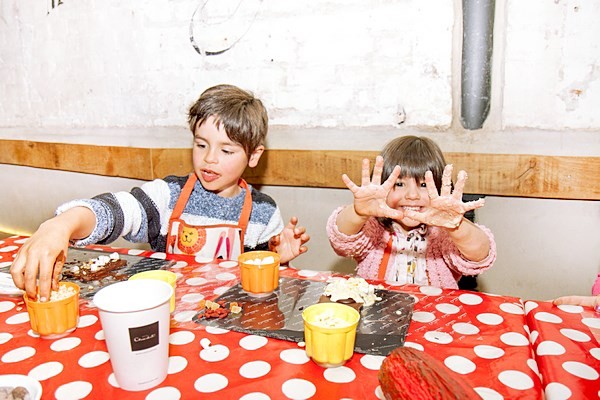 Your little ones won’t learn how to make a 3 course menu but they’ll have a hoot getting messy and chocolatey at the Hotel Chocolat workshop in Covent Garden. The 1 hour session costs £20 and includes a history of chocolate, before your budding Charlies get down and dirty in the chocolate factory. Hotel Chocolat Cookery Lesson

It’s not a cookery course, but an historic lesson in cooking, and in particular chocolate: your enfants terribles can visit the palace’s gargantuan Tudor kitchens or head over to the Georgian chocolate kitchen where Thomas Tosier, private chocolate-maker to George I, would churn out the king’s favourite spiced hot chocolate. Hampton Court 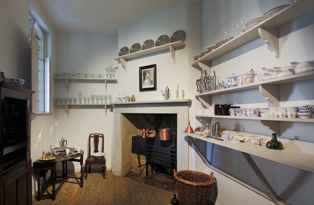 Children’s Film Club at the Firmdale

Every Saturday at The Soho Hotel, parents can enjoy some downtime with the little ones in the hotel’s luxuriously appointed state-of-the-art screening room. Tickets include a buffet lunch followed by the children’s movie of the week. Tickets: £20 per person including buffet lunch for children and adults, as well as popcorn, ice cream, drinks and a glass of Prosecco per adult. £10 per person for the film only. Firmdale Film club 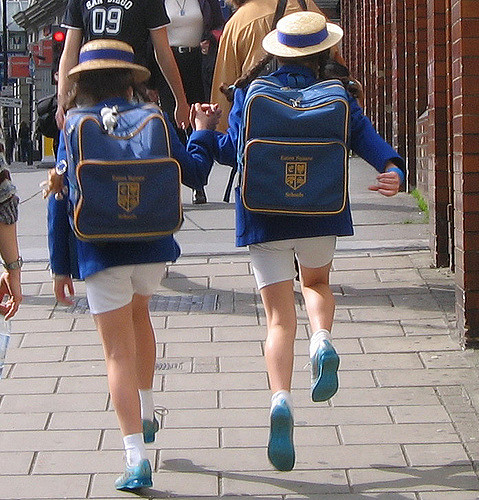 So, have yourselves a Phizz-Whizzing Summer! (JR P – Flikr)

“Summer’s lease hath all too short a date.” ― William Shakespeare

This Shore is More