Pablo Picasso’s output in 1932 was so prolific that Tate Modern was unable to list all of these in the seven-page chronology for its formidable new exhibition, Picasso 1932 – Love, Fame, Tragedy, which opened today. I am greeted by a quote when I enter the first room: “the work that one does is a way of keeping a diary.” That he certainly did for 1932 and his “year of wonder,” a period in which the Spanish artist was entrenched between his wife, Russian ballerina Olga Khokhlova, and his young lover, Marie-Thérèse Walter. It was a tumultuous and pivotal year for the man whose fame had reached dizzying heights.

This is Tate Modern’s first Picasso solo exhibition, promising to be one of London’s biggest blockbusters. And I’m not surprised.  It’s a jaw-dropping collection of 100 works, some of which are his most important. It includes six paintings created in just 12 days and reunited for the first time since they were made – all of them depicting his lover, Walter. Also on view are a further three paintings of wife and lover, made in a mere three days. It’s exhausting just thinking about this prodigious creative crop.

Picasso was 50 in 1932 and the world’s most famous and successful artist. He was, as they say, minted. He lived with his ballerina wife and their son Paulo between his chichi apartment on Rue de la Boétie and his Boisgeloup estate in Normandie.

Picasso had bumped into a 17 year-old girl outside the Galeries Lafayettes department store five years previous and had declared “You have an interesting face. I would like to do a portrait of you… I am Picasso.” And he kept to his word. Walter is all around you in this extraordinary exhibition which might leave you, well breathless. Picasso 1932 is an erotically-charged show, the pores of which seem to perspire with post-coital ecstasy and abandon. But it’s also dark and sinister, the year receding into violence, death and inky representations of Christ’s suffering as the war galloped into Europe. Best leave the kids at home for this one.

I spy with my little eye – can you see something that does not belong to a woman on here? And what do you think she is doing with her hands? The erotically-charged Le Rêve (The Dream) shows Picasso’s 22 year-old voluptuous lover in a state of abandon. It was painted in a single afternoon on 24 January 1932.

One of the six paintings produced in only 12 days and all depicting Marie-Thérèse Walter, although Picasso rarely painted from life, using his imagination instead. 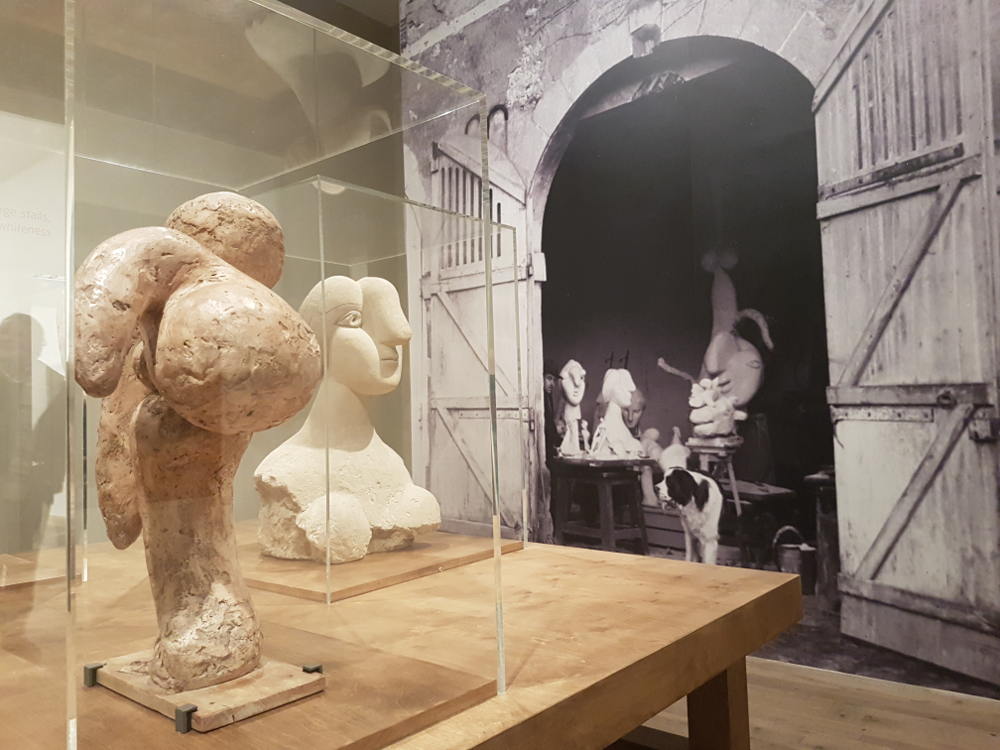 Armed with full coffers, Picasso bought himself Boisgeloup, an eighteenth-century mansion in Normandy, zooming down for visits in his swanky Hispano-Suiza limousine. He turned one of the stables into a sculpture studio and a room on the second floor into a painting studio. The château became the secret rendez-vous for Picasso and his lover, Marie-Thérèse Walter, and a hangout for friends and family. He was accompanied by Bob, his Pyrenean mastiff.

On his return from Zurich after his first major museum exhibition there, Picasso started working on a series of 13 black and white ink drawings of the Crucifixion. These are shown in the UK for the first time.

1932 ended with Walter falling seriously ill after swimming in the river Marne just outside Paris. Picasso consequently created two symbolic works – The Rescue and The Rape, set against the backdrop of the impending war in Europe, the rise of Fascism in his native country and mass unemployment.

“You start a painting and it becomes something altogether different. It’s strange how little the artist’s will matters.” Pablo Picasso

CHARLES I AT THE ROYAL ACADEMY