In 1939, the Director of the National Gallery was tasked with the critical job of moving the museum’s monumental art collection from London to a disused mining cave in Wales. In its cavernous outpost, this priceless stockpile would be safe from the nocturnal bombs raining down on the city during the Blitz. The guardian of our nation’s masterpieces was Kenneth Clark, and in 1969, he would go on to write and present one of the BBC’s most cherished programs, Civilisation (A Personal View by Kenneth Clark).  Fast forward to 2018, and a re-boot of the original series is to be unveiled on BBC2 this Thursday, 1 March. Civilisations  has inherited an “s,” giving the art history documentary a well-needed dollop of cultural globalisation.

In the original series, Kenneth Clark’s three-year Eurocentric journey would take him to 117 locations in 13 countries. It was conceived by Sir David Attenborough who was controller of BB2 at the time and responsible for introducing colour to television. (This would be its first colour broadcast). The series was a huge hit and still is – the New Yorker  describes Clark as “the man who made the best telly you’ve ever seen.”

Kenneth Clark inspecting Lucas Cranach’s Apollo and Diana from the Royal Collection during a visit to one of the Manod quarry storerooms. (Photographed by Fred Ramage,  1942)

Civilisations  opens with the story of another custodian of our past, one who would sacrifice his life for art’s sake: Khaled al-Asaad. Isis executed the 83-year-old Syrian archaeologist in 2015 when he refused to divulge the location of Palmyra artefacts, hidden from the destructive clutches of the terrorist group. Like Clark, Al-Assad understood the importance of art, our cultural lifeblood and that which expresses civilisation through the ages.

“A lot of us spend our days talking about art. I doubt if very many of us are prepared to put our life down for it.” (Simon Schama)

The new Civilisations  is presented in nine parts in the company of veteran art historian Simon Schama, classicist Mary Beard and British-Nigerian historian David Olusoga. The series spans 31 countries and six continents during which 500 works of global art are examined in high definition. It analyses how humans first started exploring art and how civilisations and artists influenced one another.

In the first episode, Simon Schama discusses the dawn of human creativity, and how a simple design from 77,000 BC in South Africa’s Cape Coast marks the spot which sparked it all. Then, it’s off for a visually spectacular excursion to the ochre-painted caves of Spain, the pleasure-resort of Petra and the tropical Mayan ruins of Mexico.

“No matter where in the world, when civilisations first made art, they made it about us.” (Mary Beard)

Leading on in episode 2, Mary Beard introduces us to the Olmec statues, symbols of Mexico’s oldest civilisation, moving onto China, Greece and Egypt in a bid to analyse how the human image is depicted in art, and how these are used to represent the society and culture of the day.

Terracotta sculptures inside The Museum of Qin Terra-cotta Warriors and Horses, X’ian, China

Whilst Clark’s 13-part series seems genteel, restrained and academic, Civilisations  roars at me from the telly: it’s magnificent, compelling and artfully athletic. Using the latest in filming technology, with plenty of drone action and high definition close-ups, the program becomes an immersive experience, one where you can practically touch the places and objects on screen.

I reckon Clark will be turning in his grave on Thursday, but only so that he can get a closer look at this masterful spin-off. I don’t think he would mind if Civilisations  were to become a global hit and another of our nation’s solid gold classics.

“People sometimes tell me that they prefer barbarism to civilisation. I doubt if they have given it a long enough trial.” (Kenneth Clark, Civilisation.)

The Wallace Collection, Museum of Methodism and the British Museum  are some of the other London museums holding festival events. 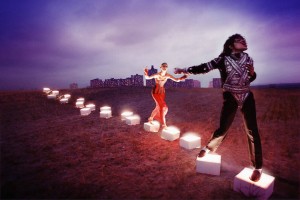